The Viridian Cannabis Deal Tracker is an information service that monitors capital raise and M&A activity in the legal cannabis industry. Each week the Tracker analyzes/aggregates all closed deals and allocates each transaction to one of twelve key industry sectors in which the deal occurred (from Cultivation to Brands), the region in which the deal occurred (country or U.S. state), the status of the company announcing the transaction (public vs. private) and the type of deal structure (equity vs. debt).

The Viridian Cannabis Deal Tracker provides the deal data/terms/valuations/structures and market intelligence that cannabis companies, investors, and acquirers utilize to make informed decisions regarding capital and M&A strategy. Since its inception in 2015, the Viridian Cannabis Deal Tracker has tracked and analyzed more than 2,500 capital raises and 1,000 M&A transactions totaling over $45 billion in aggregate value. Find it exclusively on Benzinga Cannabis every week!

Stock prices and market conditions have improved significantly since the bottom, but cannabis stock prices are still about 25% down since the beginning of the year. The partial recovery has brought back a bit of vigor to the capital raise and M&A activity in the industry.

Cannabis was classified as an “essential” business by most states, allowing continued albeit altered operations. Cannabis sales volume has held up remarkably well and recent data suggests an acceleration of the growth trajectory despite general economic weakness.

Some of the largest cannabis M&A deals ever closed during 1H’2020, including Curaleaf/Select and Cresco/Origin House and another major transaction, Curaleaf/Grassroots closed in July 2020.

The unbridled and undisciplined pace of M&A activity from 2016 to 2019 is over.  Tighter capital and lower public company valuations are mandating M&A strategies that are much more accretive financially and strategically.

Cannabis SPAC IPO’s raised more than $2.6 billion in the last year, and more than $700 million in 1H’2020,  as institutional investors recognized the opportunity to acquire distressed/discounted assets in the industry.

The U.S. cannabis marketplace has become the dominant focus of both investors and acquirers.

Convertible debt shrinks as straight debt becomes a larger part of the landscape in the U.S.

Canadian companies utilized straight debt in 61% of their debt capital raises in the first half of 2020 versus 36.3% for U.S. companies.  Historically straight debt has been confined to ancillary, non-plant touching sectors of the U.S. market, but this is beginning to change.  Late 2019 and 2020 to date have seen several large straight coupon debt issuances by U.S. MSOs and we expect this trend to continue as more of them become free cash flow positive. 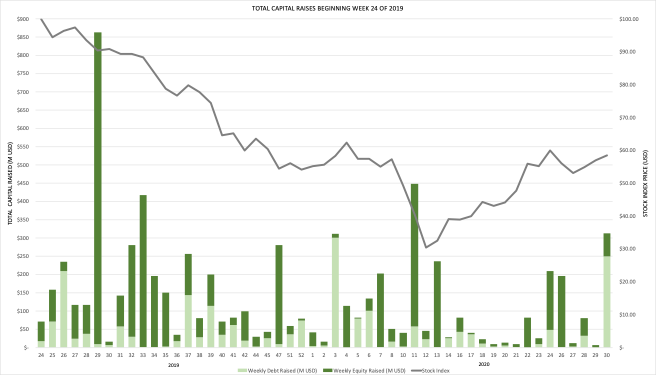 Between the end of the second quarter of 2019 and the beginning of 2020, cannabis stocks declined 43%, adding to the damage from earlier in the year decreases.

The market traded off an additional 45% between the beginning of 2020 and its bottom on March 16, as the full impact of COVID-19 became apparent. The total market decline from the end of the Q2’2029 through the market bottom was approximately 69%.

2nd Half Outlook for Capital Raises

Valuation levels have stabilized after a significant bounce off the bottoms.

Consolidation/roll-up initiatives underway across the industry will require both acquisition and operating capital.

COVID-19 induced budgetary shortfalls will give more states an incentive to pass Medical and Adult-Use legislation in the November 2020 elections.

Potential for landmark changes in federal regulation of cannabis if Democrats win control of the White House and Senate in addition to retaining the House.

Cultivation & Retail, consistently the largest M&A sector,  recorded 25 M&A transactions in the first half of 2020, down 79% from the 117 recorded in the first half of 2019 and 61% from the 64 recorded transactions in the second half of 2019.  Significant declines in activity also occurred in Hemp, and Infused Products and Extracts.  The Biotech/Pharma sector saw the largest increase in M&A activity.

We recorded 5 going-public transactions in the first half of 2020, raising a total of $504 million.  This number of transactions was 62% lower than the 13 recorded in the second half of 2019 and the capital raised was 63% lower than the $1.35 billion raised in the second half of 2019.  The change was largely due to the virtual cessation of RTO transactions (1 versus 6) and a lower amount of SPAC capital raised.  The second quarter of 2019 figure was heavily influenced by two large SPAC IPOs (Bespoke and Subversive) that together raised $925 million.

The unbridled and undisciplined pace of M&A activity from 2016 to 2019 is over.  Tighter capital and lower public company valuations are mandating M&A strategies that are much more accretive financially and strategically.

2nd Half Outlook for Mergers & Acquisitions

SPACs should begin to announce/close deals.

Distressed companies will be sold as ongoing operations or in pieces.

The U.S. cannabis marketplace will remain the dominant focus of both investors and acquirers. 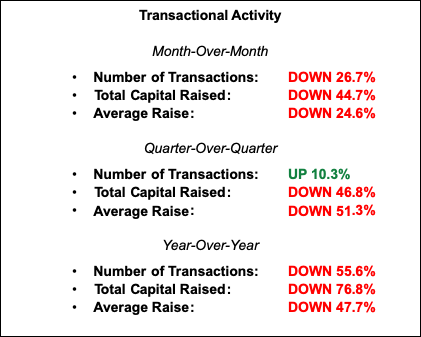 Equity issuance is up strongly since March, due in part to the recovery in stock prices.

Debt issuance has remained weak since the onset of COVID-19 as more conservative debt investors ponder the sustainability of the industry’s robust performance in the face of severe economic disruption.

Public companies represented 85.0% of all capital raises in the second quarter of 2020, down from 91.5% for Q1’2020 but up from the 61.7% for Q2’2019. The turbulence in global markets in general, and the cannabis markets in particular, will continue to drive investors to seek liquidity.  The capital crunch in the cannabis industry is acutely impacting private companies.

Viridian Capital tracked 166 capital raises in the first half of 2020 that raised a total of $2.6 billion.